Habibitus column: give me my cup, you Otto!

The mix-up of the winners at the Oscar awards was not an accidental faux pas. It was part of a racist tradition. 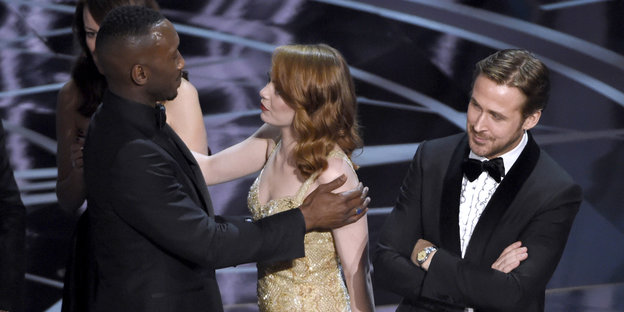 There are winners and there are losers. And then there are those who have actually won, but still cannot enjoy the success. The latter was seen on the night from Sunday to Monday at the Oscar awards ceremonies in front of an audience of millions.

The mix-up of the winning film in the “Best Picture” category not only made headlines, but above all an embarrassing key scene: The moderation slogans read off the wrong card and falsely proclaim “La La Land” as the winner. The entire crew comes on stage, the first white Guys thank their clan.

As the third white Guy quickly grabs the microphone and drops family member names, it has long been clear (to him too) that he is not right at the moment. Finally he ends his speech with a passive-aggressive loser face and the sentence: “By the way, we have lost.” Only then does the correction follow: The real winner is “Moonlight”, a queer black film.

Now I'm not the kind of person who follows the award ceremony live at night. I read the most exciting results online the next day. In addition to the strong speech by actress Viola Davis, winner of the award for best supporting actress, only this faux pas stuck.

Faux pas sounds like it was an accidental mix-up. A mishap that could have happened to any category. But it's not. What it really is about is that Black People and People of Color (BPoC) are rarely allowed to just win.

How many times have we had to apologize for being the best? And always explain that a victory means nothing and that we are actually all winners? A lot of us are totally bad at receiving compliments from white Accept people.

I always feel compelled to mirror something similarly nice. Even if it doesn't. It is extremely difficult for us to do this white People to be in the spotlight.

Either we put ourselves in the shadows of BPoC whiter People or white People interfere: At the Olympic Games, the success of black athletes in 2016 is still explained on the basis of biological, racial-theoretic logic. Your profit should never just stand still.

Why white Do people never let BPoC get their hard-won glory? Because they believe the world is theirs. Because historically it has always been presented as if winning were a white Hobby. We, on the other hand, are used to staying wherever possible in the places assigned to us. Most of the time they are not at the big table.

At the same time, we need to be at all with ourselves white Trying to keep up with people three times as hard as they are. If we are also women or trans people, maybe even five times. In doing so, we should definitely learn to enjoy the recognition. We already know that we can lose well. Now that we can win even better, too.