What are image negatives

What is a photo negative? - An introduction

How paper prints or slides work is obvious. But what exactly is a photo negative again? This article will teach you the basics.

Those who take photos nowadays usually use a digital camera and then look at the pictures directly on the computer. The development and copying of photos are also almost entirely digital.
The photo negative, which just a few years ago was one of the most common means of making prints, is slowly being forgotten.

But what exactly are negatives? In photography, the term negative refers to an image that has been exposed and developed on an analog recording material, which is reversed compared to the original motif and has exactly the opposite color.

That means: In the case of black and white negatives, the light (= strongly exposed) parts are shown dark and the dark parts are shown light. In the case of color films, the negative represents the complementary colors. In addition, the negative photo has an orange masking. The reversal of the colors of the negative film can be done by copying onto photo paper, another film or an electronic medium and allows any number of positives. The counterpart to negative film is the so-called positive film or slide or reversal film.

On the trail of the negative

If you want to retrace the footsteps of the first photo negative, you have to take a long journey back in time. Already in the 1830s Years ago, the Englishman William Henry Fox Talbot invented the negative-positive process (calotype). While photographs were always unique before, the new method made it possible to reproduce the photo negatives using the contact process. The option of simply inserting a rolled-up negative film into the analog camera, which enables multiple recordings without changing, did not exist at that time.

Rather, Talbot worked with individual paper negatives or glass plates coated with light-sensitive silver iodide. In the camera, an invisible image was created on the image carrier, which could be brought to light as a negative photo by developing with gallic acid, fixed with sodium sulfide and then copied as a positive onto another carrier by means of targeted exposure. In a similar, standardized development process (C-41), negative strips are still produced today in laboratories and darkrooms, which can be enlarged by projection onto light-sensitive photo paper. 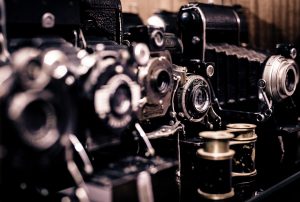 The advantage of negative films over slide films lies in the greater exposure latitude. Black and white and multilayer color negative films are available in a variety of formats. The most common formats in amateur photography are the cartridge-shaped 35 mm film and the roll film medium format (e.g. 4.5 × 6, 6 × 7 and 6 × 9 cm), which can store more information due to the larger negative photo area and so a delivers a better picture. You can recognize 35mm negative strips by the holes at the top and bottom.

In addition to the size classification, there is a distinction between the negative films in terms of their sensitivity to light (specified in ISO, ASA and DIN). The rule was: the more light-sensitive the film, the worse the resolution of the negatives. At least as important, however, is the quality of the film material used. In particular, cheap film material is also less durable, so that many negative strips have a color cast after just a few years.

Save your memorabilia with DIAFIX!

As with all other analog media, there is no guarantee that the photo negatives will last. As a rule, prints can still be made from the negative strips over a period of at least ten years. However, if the photo carriers are stored for a long time, the colors often fade. Light in particular accelerates this process, but dust, water, heat and scratches also lead to premature deterioration of the negative photos.

So don't let your memorabilia get forgotten. We at DIAFIX help you to preserve your "treasures" and "contemporary witnesses" for future generations. In digital form, you can not only copy your negative photos at any time, but also present them conveniently on the computer or television.

Take advantage of the moment and have your negatives digitized!

The best: DIAFIX offers you a best price guarantee for the digitization of your negatives. Bring your snapshots to one of our acceptance points personally or send them to us by post.

Do you have any questions? Do not hesitate and let our friendly customer service offer you non-binding and individual advice. Just give us a call

The phone hours are

What do you think?