Define the cache in SSRS

In SSRS, reports are defined in the Report Definition Language (RDL), an XML markup language. Reports can be designed with newer versions of Microsoft Visual Studio by installing the Business Intelligence Projects plug-in; Based on the RDL texts, reports can be generated in a number of formats including Excel, PDF, CSV, XML, TIFF and other image formats, as well as an HTML web archive. SQL Server 2008 also supports Microsoft Word (DOC) format.

Users can work directly with the Report Server web service or use the Report Manager instead, a web application that in turn communicates with the Report Server. With Report Manager, users can view and subscribe to reports and manage reports, data sources and security settings. Reports can be sent via e-mail or placed in a file system via shared folders. Security is role-based and can be defined at the level of the individual objects (report, data source), folders of such objects, or globally for all objects. The roles can be inherited and overloaded.

Reports can be generated regularly with "Subscriptions". A special feature are the data-controlled subscriptions, which allow the number of reports to be generated to be taken dynamically with their parameters from the database itself.

In addition to the autonomous report server, which is part of the SQL server delivery, RDL reports can also be viewed with ReportViewer via the web or via Windows Forms. This allows reports to be embedded directly in websites or .NET applications. ReportViewer can process reports either via the server or locally.


Reports in SharePoint
In addition to the independent mode written here, the Report Server can alternatively be operated in the SharePoint-integrated mode. The Microsoft Office SharePoint Server takes over the administration of the reports and the visualization within the Sharepoint portal.

The Reporting Services 2008 have experienced extensive expansions and improvements:

More flexible report layout through tablix and gauges
The biggest changes of the Reporting Service 2008 compared to its predecessor are the introduction of new diagrams, gauges and the tablix (combination of table and matrix) and which now make it possible to display and visualize sophisticated and representative graphics of key figures, KPIS, etc.

New export format Word
In addition, tools for managing and publishing reports are provided.
All rendering engines have been revised, rendering in Word format is now possible.

Report designer for end users
End users can use the Report Designer to create sophisticated reports without using the Business Intelligence Development Studio.

Installation and operation independent of IIS
A dedicated web server (IIS) is no longer required to deliver reports over the Internet. 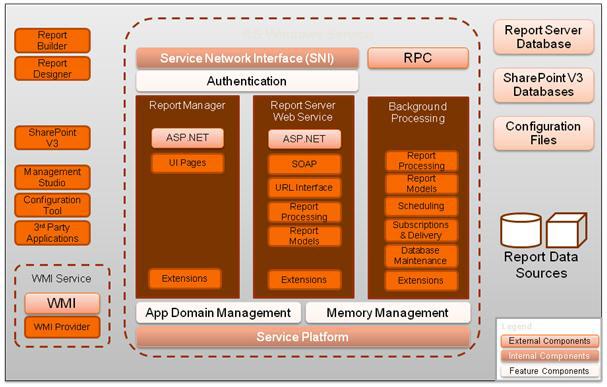 An important innovation in SQL Server 2008 Reporting Services is called Tablix. Tablix is ​​a word creation from "Table" and "Matrix". This is a new visualization element that has both the function of a table and a matrix.

Row and column groupings are combined in a tablix. Tablix opens up new possibilities for working with complex and aggregated data, but working with simple tables and matrix structures is still possible.
Until the 2005 version of Reporting Services, the decision had to be made on a list, a table or a matrix. Row or column groupings were possible, depending on the control. Tablix is ​​a data region, so there is no corresponding control in the Toolbox. The data region is integrated into lists, tables and matrices by converting tables with row groupings supplemented by column grouping into real crosstabs.

Table and matrix with Reporting Services 2008

Business intelligence is the focus of the SQL Server 2008 R2 version. In addition to PowerPivot, this primarily means improvements in reporting services.
The highlights are the new map control for map displays in reports, the new Report Builder 3.0 and improvements in the Report Manager.

For the visualization of data are now available with Sparkelines, data bars and indicators several elements available.
More information in the Sparkelines area.

The most interesting innovation in Reporting Services in Release R2 is Report Builder 3.0. It now has a new server mode that caching when rendering reports. Subsequent layout changes are accelerated because the data is fetched directly from the cache.

New controls are available for report design. With Map Control, the Reporting Services now allow maps and geodata that are stored in an SQL database to be displayed. Reports generated with Reporting Services can also be integrated into Powerpivot and other applications if they are created in Atom XML format.