Which MacBook or Del laptop is better

Two new video releases provide interesting insights into Apple's new M1 processors. "The Tech Chap" lets the new Apple processor in the MacBook Pro 13 compete against the Dell XPS 13, which is equipped with one of the latest Intel processors, and Ruslan Tulupov manages to add six screens to the new Mac mini and five screens to the new MacBook Air operate.

Dell equips its XPS 13 with the latest Intel processors of the 11th generation. In the test, the 9310 model, equipped with an Intel Core i7 with 2.8 GHz, 16 GB of RAM and the latest Xe graphics, competes against a MacBook Air with 8 GB of RAM.

It should be mentioned that the Intel notebook with this configuration is 300 British pounds more expensive than the MacBook Air with an 8-core M1 processor, which is available in Great Britain for 1,249 pounds. Both notebooks are in the same class and are pleasantly compact, although the Dell device is a tad smaller and lighter than the Apple notebook. It should also be noted that the Dell device is equipped with a touch screen.

Thanks to Apple's new M1 processor, the new MacBook Air achieved impressive results in the practical test. The notebook is not only faster than the Windows competition in almost all cases, but it also remains noticeably cooler - even though Apple has dispensed with an integrated fan. 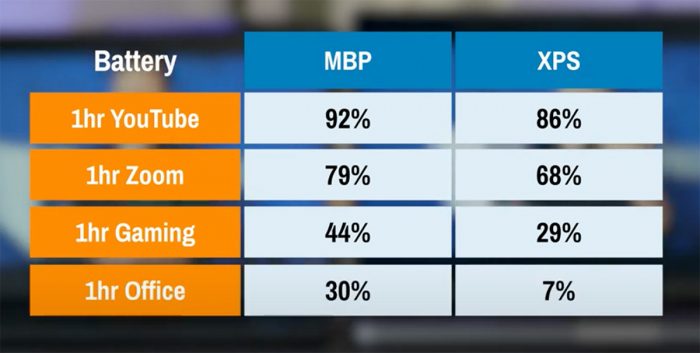 The Apple advantages are not only evident in the application performance, but are also noticeable in the significantly better battery life. And with all of this, it must be noted that many of the applications tested in direct comparison are not even optimized for the new Apple processor, but only run in Apple's Rosetta emulation.

The bottom line is that the new Dell XPS 13 is significantly better than its predecessor, but it can't hold a candle to the MacBook Air with Apple processor. Those interested should note, however, that the software selection on Windows - especially for games - is still the largest. The tester also recommends using the MacBook Air with 16 GB of RAM in the absence of any subsequent upgrade options.

Up to six screens on Apple's M1 Macs