How can I reverse the entry in SAP

Report with a hook

As standard, SAP delivers a report that is used for precisely these scenarios, namely the report RDDIT076. Unfortunately, this also has risks and side effects, which we have described here, among other things. So the report alone should be a help in an absolute emergency.

In our whitepaper we show you the five biggest weaknesses of the SAP transport system and our practical solutions, how you can fix them.

The initial situation could look something like the following illustration.

In the first step, start the report using transaction SA38. This takes you to a selection screen in which you can enter the transport request or the transport task. In this example the transport order was specified.

After you have confirmed your entry, you will be taken to an overview page. On this you can individually mark the entries to be changed and have the details displayed. Now switch to edit mode and change the status, for example, to undo the approval. Finally, confirm and save the changes. Of course, the other properties of the (SAP transport) order can also be changed using this report. 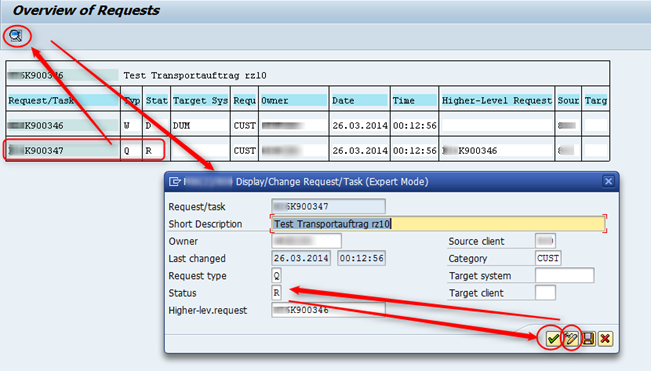 As you can see from the figure, the transport task has been reset and is back in the development status.

Do you need support with the implementation? Our author is a consultant on this topic. Ask him about the RZ10.de partner product consultant for SAP Basis

Was that helpful to you? I look forward to your feedback and comments.