How nobles dressed in the Middle Ages

Clothes according to the state

For the people of the Middle Ages, clothing was one of the most important indicators for recognizing the status of the person opposite. Written dress codes stipulated bindingly for the various classes which clothes were considered appropriate and could therefore be worn. It was not until the late Middle Ages that dress codes began to weaken, as the rising middle class in the cities and some farmers who had become rich disregarded the regulations and now dressed as splendidly as the members of the nobility.

Between the 4th and 9th centuries, their own liturgical clothing gradually developed. The major differences to everyday clothing lay in the fact that the clergy did not replace the long tunic with the short tunic, but instead stuck to the long tunic as a demarcation from the rest of society. In addition, the various vestments were now assigned to specific liturgical functions.

The main components of liturgical clothing were already established in the 6th century. Changes in clothing affected the intended use of individual items of clothing and the inclusion of more than liturgical ones 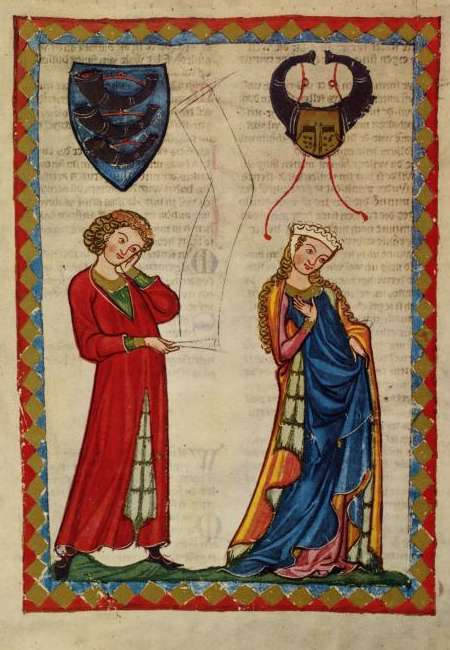 Dress. From the 13th century on, the focus was on form, equipment and material; a real color canon of liturgical clothing developed from the 12th century onwards.

Clothing of the nobility

Clothing was one of the status symbols of the nobility. Because of this fact, the members of this class attached great importance to the fact that their clothing was made of precious fabrics, which indicated the high birth of its wearer. Rich decorations of these fabrics were added as a feature, as well as the color, because wearing colorful clothes was the privilege of the nobility. Precious accessories completed the picture. But conclusions about the respective status of the nobleman can also be read from the shape of the clothing. Generally speaking, the tighter and longer the clothing, the higher the rank. During the entire period of the Middle Ages, the clothing of the nobility showed changes and developments in fashion.

Clothing of farmers, artisans and citizens

The clothing of the simple rural population hardly changed during the entire Middle Ages. Above all, it had to be able to carry out physical work unhindered in it and was therefore simple and broad according to its purpose. The craftsmen had their own dress code, which was binding for the members of the guild and set out in writing in the respective guild regulations. The citizens - such as the merchants in the cities - were also bound by applicable dress codes. Above all, however, the rich among them increasingly disregarded these regulations from around the late Middle Ages and often dressed even more splendidly than the nobility.