Who opened the first international airport 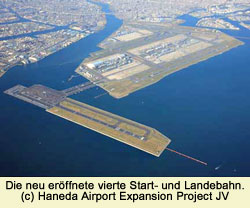 Haneda Airport (Tokyo International Airport) opened the gates of its new five-story international passenger terminal on October 21, 2010 and opened its fourth runway on the same day. Haneda has thus entered a new era as a fully-fledged international airport. Since Narita International Airport opened in Chiba Prefecture in 1978, operations in Haneda have been limited to domestic flights and regular charter flights to a handful of destinations in East Asia. But now, after 32 years, Tokyo once again has a direct gateway to many countries around the world. The buildings at Haneda Airport were also expanded or renewed as part of this new function, so that it now serves not only as an airport but, thanks to its commercial facilities, also as a showcase for Japanese culture for passengers from all over the world.

Haneda's main asset is its location in close proximity to central Tokyo. New stations on the Tokyo Monorail and Keikyu Line mean that travel times to the city center are among the shortest in the world compared to other major international airports. For example, it only takes 13 minutes to get from the airport on the Keikyu Line to Shinagawa Station, where you can change to a Shinkansen or take the monorail to Hamamatsucho Station. It is only six minutes from Hamamatsucho to Toyko Central Station. This puts Haneda in a good position compared to other major international airports such as JFK in New York (35 minutes) and Charles de Gaulle in Paris (29 minutes). Arriving at the airport couldn't be easier: the monorail train station is just a minute's walk from the departure hall.

In February 2011, Haneda Airport offered regular flights to 17 destinations in Asia, Europe and North America. In total there are up to 54 flights a day. In addition, Haneda continues to serve as an important domestic airport with up to 450 flight connections per day. The aim is to get the airport together with the Narita airport 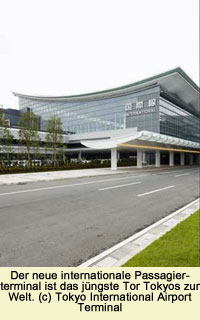 to become one of the leading hubs for air traffic in Asia, with 24-hour operations including the possibility of early morning flights and night flights.

Haneda's unbeatable location and early morning and night flights have already made this new international facility a favorite with Japanese travel agencies. The new terminal makes it easier for passengers from Japan and neighboring Asian countries to travel over the weekend by leaving on Friday after work and returning in time on Monday morning to go straight to work from the airport. The airport's central location and convenient connections to domestic flights are sure to change the way tourists and business travelers travel.

Showcase for "Made in Japan"

Haneda's new five-story international passenger terminal is an attraction in itself. The arrivals hall is on the second floor, while the departure hall is on the third floor above. Another special feature of the building is a spacious entertainment and relaxation area with 105 shops and restaurants. The "Edo Market Place", named after the old name of Tokyo, comprises the Edo Koji area on the fourth floor and the Tokyo Pop Town area on the fifth floor. Offers include a number of major “Made in Japan” shopping facilities as well as culinary attractions - even for those visitors who are not waiting for their flight. 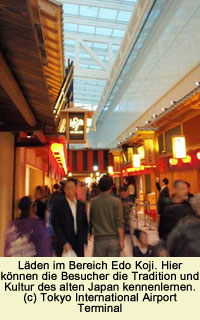 The Edo Koji area is modeled on a typical street from the Edo period (1603-1868). There are restaurants with traditional Japanese dishes such as sushi, sukiyaki, ramen and soba noodles or Tonkatsu (Pork chop) together. Also restaurants that offer fine dining from Japan, such as this Hyakuzen, can be found here, which offers seasonal specialties. Here, visitors can get to know the tradition and culture of ancient Japan on their tour under the impressive, dynamically curved roof. Many gift shops can also be found on this floor, offering popular souvenirs to visitors from abroad: T-shirts with Japanese characters, traditional wrapping cloths (furoshiki), traditional paper items and a wide range of carrier bags. 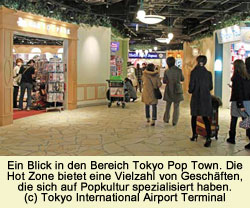 Tokyo Pop Town on the fifth floor, on the other hand, offers a completely different side of Japan: Modeled on contemporary Tokyo, the offers here give visitors an insight into the cultural scene of today's Japan. The "Cool Zone" includes shops that offer the popular action figures and corresponding toys. Perhaps the most notable attraction is the Starry Cafe, the world's first planetarium cafe in an airport. Up to 40 million stars can be projected onto the dome ceiling of the cafe. When not in use as a planetarium, the facility turns into a café and bar, where guests can enjoy their drinks under an artificial starry sky. The “Hot Zone”, on the other hand, has a 50 m long racetrack for model cars as well as specialty shops for anime characters and other items from the field of pop culture, which are very popular with young and old from all over the world. The aim of Tokyo Pop Town is to draw the attention of visitors to products and facilities from Japan and to give guests from Asia and the rest of the world an insight into what Tokyo and Japan as a whole have to offer.