How does Addison's disease affect the body?

Addison's disease (primary adrenal insufficiency, hypoaldosteronism, Addison's disease, bronchial skin disease): most common form of Adrenal hypofunction, characterized by a deficiency in aldosterone, the most important mineralocorticoid - and cortisol, the body's own cortisone. Addison's disease affects women in particular. If left untreated, the disease is life-threatening.

As a rule, Addison's disease develops slowly. The lack of aldosterone and cortisol initially leads to non-specific symptoms. Aldosterone regulates the fluid and electrolyte balance and also influences blood volume and blood pressure. If there is a deficiency, it leads to fatigue and circulatory problems as a result of the low blood pressure. Cortisol regulates the metabolism and ensures improved muscle circulation and energy supply in stressful situations. Possible consequences of a deficiency include weight loss and muscle discomfort. In the advanced stage, the skin turns bronze. The reason for this is an increased release of the cortisol-stimulating hormone ACTH, which stimulates pigment storage in the skin. This bronze skin is often particularly pronounced on the inner surfaces of the skin, on the soles of the feet, on the oral mucosa and in scars. 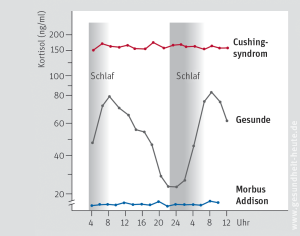 It is not uncommon for the first sign of the disease to be one Addison crisis: An initially unrecognized, slowly increasing failure of the adrenal glands is suddenly worsened by an infection or injury. Those affected dry out internally due to severe vomiting and diarrhea, often suffer a circulatory collapse and impaired consciousness. If left untreated, the Addison's crisis is fatal, but treatment in the intensive care unit with sufficient intravenous fluids and high-dose cortisone therapy quickly averts the danger to life.

The doctor does that

Addison's disease and the other underactive conditions of the adrenal cortex are well treatable, but require lifelong, carefully balanced and regularly controlled hormone replacement therapy. The aldosterone deficiency is remedied with the help of the synthetic drug fludrocortisone, the cortisol deficiency usually with hydrocortisone. The body's own cortisol production is subject to natural fluctuations in the course of the day - with minimum values ​​at midnight and maximum values ​​in the morning. This rhythm is mimicked with the help of a two-phase preparation or by taking it twice (a low dose in the evening, a high dose in the morning). The dose is below the Cushing threshold - the threshold at which symptoms occur as a result of excess cortisol. Dose increases are in stressful situations such. B. necessary in the event of infections or exceptional physical stress (including vacations).

If left untreated, the adrenal hypofunction is fatal; if not treated, Addison's crises threaten. However, with careful hormone replacement therapy, the life expectancy of those affected is not reduced.

Important note: This article has been written according to scientific standards and has been checked by medical professionals. The information communicated in this article can in no way replace professional advice in your pharmacy. The content cannot and must not be used to make independent diagnoses or to start therapy.
<?