How does a fluorescent light work

What does fluorescence mean?

Fluorescence is one of those physical phenomena that we have to deal with quite often in practice without even noticing it. You may have noticed the bright white shirts or sometimes even teeth in a club with black light lighting. Perhaps you have already stumbled upon the so-called optical brighteners that are added to many detergents and that are sometimes discussed because of ecological or health concerns. Often, however, you also have fluorescent materials in your hand without consciously noticing the effect, for example with fresh white textiles or particularly white letter paper. These are all examples of everyday things that have been treated with fluorescent fabrics.

Fluorescence describes the phenomenon that some materials, if they are irradiated with light in a certain wavelength range, send back part of the light - but not at the same frequency, but mostly at a longer wavelength. In contrast to phosphorescence, there is no afterglow for longer than a few nanoseconds:

Let's stay with the example of the black light in the club. Black light is another name for a UV light source. Just like visible light and infrared radiation, UV radiation is electromagnetic radiation. The only difference between the three types of radiation is their wavelength.

The UV spectrum covers a fairly wide range of wavelengths. The neighbor at the long-wave end of this spectrum is the deep blue of visible light. The radiation from the UV light sources in a club now hits the shirts of the guests. These shirts, in turn, were either treated with so-called optical brighteners during the manufacturing process, or they were part of the detergent with which the shirts were last cleaned.

Optical brighteners belong to the group of fluorescent dyes. These are substances that reflect incoming UV radiation mainly in the short-wave (i.e. blue) end of visible light. The slight (light) blue tint mixes with the yellowish-brown color of discolored textiles and makes the result appear pure white to our eyes. This doesn't only work in the club, because sunlight also contains UV radiation in addition to the spectrum that we can perceive with our eyes. 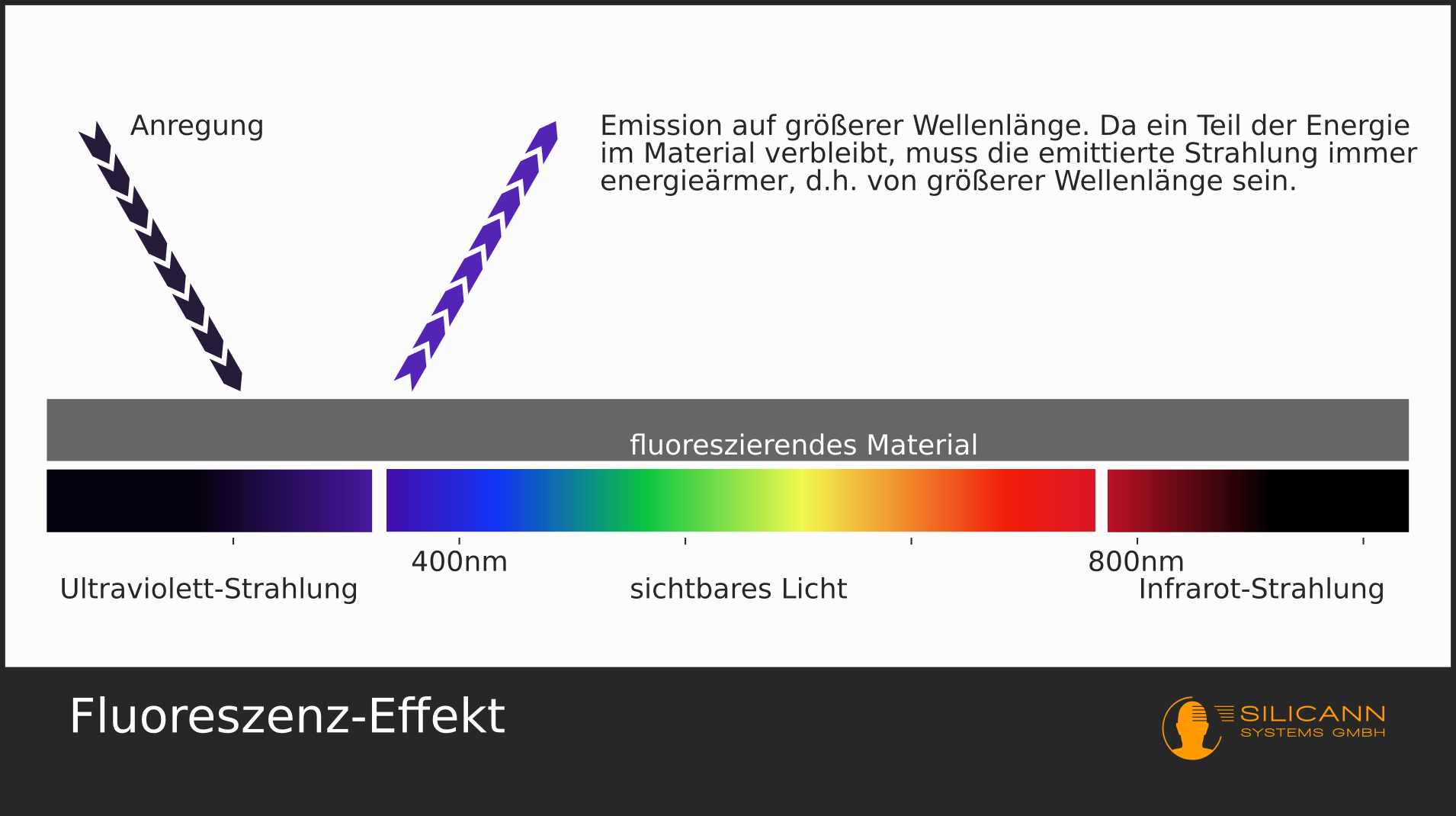 Optical brighteners, especially in detergents, are now not without controversy. On the one hand, not all parts of the textiles adhere during washing. A certain part of the substance ends up unchanged in the wastewater. In this way, these fluorescent dyes can accumulate in the waters. This is not unproblematic because many members of this class of substances are suspected of acting like artificial hormones and thus influencing the human metabolism and that of other animals.

Like phosphorescence, fluorescence is one of the processes referred to as luminescence or cold glow. The special thing about the chemical or biological processes leading to luminescence is the fact that substances emit light in the spectrum that is visible to humans and do not have to glow themselves. In contrast, most of the other processes that lead to light that is visible to us are caused by red-hot bodies. With the sun, the other stars, a classic incandescent lamp or halogen lamp, a candle or the glow of a campfire, the heat is the reason for the light emitted. With these hot bodies, the heat has shifted the spectrum of thermal radiation away from the infrared in the direction of visible light, so that we can perceive it with our eyes.

In addition to black light, there are various other possible uses for the fluorescence phenomenon. Silicann Systems has implemented several projects in the field of germ sensor technology. In these cases the fluorescent substances are microorganisms. If a test is to be carried out to determine whether a patient's tissue sample contains certain germs, this test can be carried out optically with the aid of a spectrometer. To do this, the microorganisms must first be examined for their optical properties. Some classes of pathogens have fluorescent components. Once you have researched the wavelengths of the light absorbed and then emitted again as fluorescence, further tests are a matter of seconds: The sample of a new patient is irradiated with light of a certain narrow wavelength range. If the sample itself emits electromagnetic radiation on the corresponding belt, then this sample is contaminated with the respective microorganisms. If there is no reflection in this band, it can be assumed that the tested sample does not contain these germs.

So far, samples have been examined by leaving them alone on a nutrient solution for several hours under ideal conditions for these germs. A microscope was then used to manually check whether a culture of this had developed in the Petri dish. This manual process takes 24 hours and more. A spectrometric measurement that makes use of the fluorescence effect can provide comparable results within a few minutes.

You may know this from crime series: A crime scene is sprayed with an unspecified liquid. Afterwards, under illumination with UV light, traces become visible to our eyes that were not previously visible. Some body fluids, on the other hand, are autofluorescent, i.e. no fluorescence marker is necessary for their detection: If they are irradiated with a certain light source, they themselves emit light in a narrow frequency band. Since the special excitation and fluorescence frequencies are known for many human substances, there are special light sources or filters for light sources for this purpose in order to specifically stimulate individual proteins.

Medicine uses fluorescence markers for many other areas. They help, for example, to specifically highlight individual components of cells and thus enable more differentiated analyzes. There are even special markers for individual tumor types. Often, however, these substances do not fluoresce in the visible light range, so that spectrometers are often used for evaluation in laboratories.

Another important field of application is the verification of the purity or origin of chemicals for the production of medicines and other sensitive products. Sometimes the components are autofluorescent again and can be easily distinguished by special lighting. In other cases, the manufacturers also give special markers directly to the product so that it can be proven in later production steps that it is the original and not a counterfeit. These tests are usually automated directly on the production line: Inline spectrometers continuously monitor the substances passing through during production.

Even supposedly low-tech industries such as agriculture now use fluorescence effects. The chlorophyll contained in almost all plants also fluoresces. If one knows the plant species and its usual chlorophyll content, then with the help of a spectrometer it can be indirectly measured how the fertilization of the soil is going: If the chlorophyll content is lower than expected, the plant lacks the nutrients to produce enough of the molecules . In this way it is already possible to avoid over-fertilization and thus to deal with the soil and its surroundings in a more sustainable manner.

As spectrometers become more widespread, many more applications will certainly become apparent in the future, in which we will use the originally rather esoteric phenomenon of fluorescence in everyday life.