As far as the eye can see

The world of Romanian car thieves 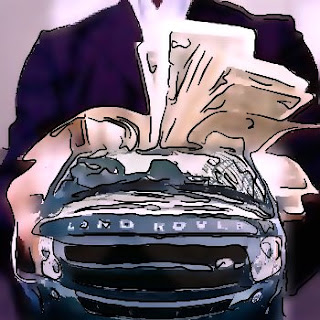 Andrei Hrebenciuc, son of MP Viorel Hrebenciuc, was amazed when a luxury BMW series 6 sedan was stolen from him for the second time recently. The thieves had made it easy for themselves. In the fitness center, where Andrei was getting in line with sport, they stole the keys of his BMW and disappeared along with the car. The pity for the politician's son, who actually only attracted attention through gossip stories, is limited. Especially since the car was later found undamaged on the side of the road. The police suspect that it was supposed to be picked up by a gang from the former Soviet Union.

The matter throws once again a spotlight on the still well-functioning world of car thieves in Romania. According to the findings of the Romanian police, the typical car thief is around 30 years old, an unteachable repeat offender who carries out his deeds without being ashamed, has a middle school education, he likes to make a noise and he throws money around. In short, this is a boastful criminal, but who shows a tendency to talent in the technical field.

The cars in western Europe have not been stolen by brute force for a long time. The leaders of the typical Romanian gang of thieves consist of 2 to 3 chiefs. They recruit so-called "clubs". These are men with modest incomes who roam Europe and rent cars from rental companies. The "Knüppel" receive between 100 and 200 euros for each rented machine. The car is then taken to Romania and the gang leaders take care of the forgery of the documents. All forgeries are carried out with the help of the computer. They get the data from the Internet or from companies that have gone bankrupt. There have already been vehicles that were supposedly registered to companies that had never bought a car. The thieves know they have about 3 weeks from the time the vehicle is rented to the time the vehicle disappears. The vehicles are then sold around 20% below the market price. Since they usually do not change the chassis number, the buyer may face the unpleasant experience that his vehicle is being confiscated by the police. The damaged rental car companies rarely manage to get to the leaders of the gang, mostly it is only the penniless "clubs" who are arrested by the police from time to time.

Another scam is stolen vehicles that are leased. Some companies that are on the verge of bankruptcy have adopted this method. Here the papers are forged and the vehicles - usually trucks - are re-exported to Western Europe, where they are mainly sold to Romanians living in Italy and Spain. The police officer in charge explains how the thieves proceed: "If the leasing installments are not paid for 3 months, the foreclosure procedure begins. During this period, the vehicle is carried out. At the moment we have been able to find 10 trucks, 3 of which we have at the border with Bulgaria and the rest before they were exported to Turkey. If the vehicles can no longer be found in the country, the leasing companies will report the vehicles as stolen so that they can collect the insurance. "

The greatest masters, however, are the thieves of luxury vehicles. Romanian thieves learned from Polish and Serbian specialists how to defeat the latest anti-theft technology. The best thieves manage to crack the luxury car here within a minute. Some, like in the case of Hrebenciuc, make it easier for themselves. For example, they steal the keys from a woman's pocket, follow the vehicle and if the husband gets out quickly to buy a newspaper at the kiosk, they quickly jump behind the wheel and off and on.

The vehicles are mainly brought to countries in the former Soviet Union. The cooperation between the Ukrainian and Romanian police is not so far not very well developed, so that hardly a vehicle can be found again, let alone the gangs of thieves can be stopped.