What is Donald Trump's position on Turkey

US President Donald Trump is not particularly concerned about the situation on the Turkish-Syrian border. On Thursday, he compared the conflict between the Turkish military and Kurdish troops to a quarrel between two children. "Sometimes you have to let them fight for a while," Trump told supporters in Texas. "Then you pull them apart." The US president added that both sides fought hard.

Almost 500 people are said to have died since the start of the Turkish military offensive last week, including 72 civilians. The information comes from the Syrian Observatory for Human Rights, which is based in the UK and receives information from supporters in Syria. The information is difficult to verify independently. Other sources say up to 300,000 people have already been evicted from their homes. And UNICEF reports that the fighting shut down a water station that supplied 400,000 people with water. This has nothing in common with a playground scuffle.

On October 6, the president announced the withdrawal of US troops from northern Syria. In a statement from the White House, it was said that Turkey would "soon begin its long-planned operation in northern Syria." The US military, it was said, would not support the Turkish troops in this operation. But there was no question of a conviction either. And this despite the fact that the operation was directed against Kurdish militias, who were among the most important allies in the US's fight against the "Islamic State".

But shortly after the Turkish military invaded Syria - and it was harshly criticized by many Republicans for the brutal violence - Trump threatened a "total destruction" of the Turkish economy. On Thursday, Trump announced that the United States, represented by Vice President Mike Pence on a visit to Ankara, had negotiated a ceasefire with Turkey and threatened sanctions had been lifted. 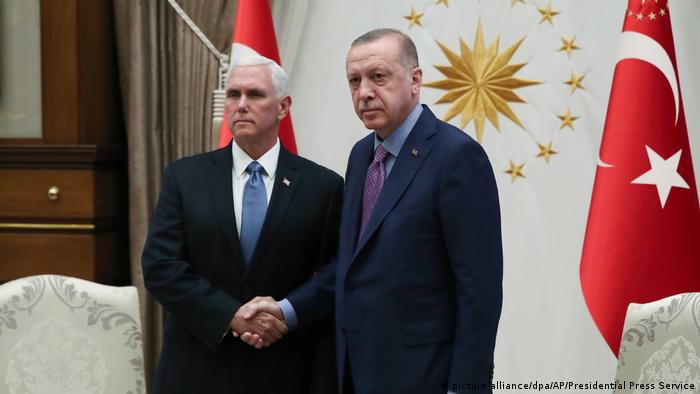 Pence and Erdogan agree on a ceasefire - not a permanent solution

What a success! But what the US president proudly presented to the public "was the solution to a problem that he himself created," said Frances Brown of the Carnegie Endowment for International Peace think tank in an interview with DW. The behavior of the US government is confusing for allies: "Sanctions are announced for an action that Turkey believed had received the green light from the White House."

"Not a serious strategy"

Bulent Aliriza, founder and director of the Turkey Project at the think tank Center for Strategic and International Studies (CSIS) goes even further. He does not remember that the three of Vice President Pence, Secretary of State Mike Pompeo and National Security Advisor Robert O'Brien had ever traveled somewhere "to clean up the mess Trump made," Aliriza told DW. The three most important representatives of the president in foreign affairs flew to Ankara on Wednesday. "It is almost embarrassing to watch the contortions of US foreign policy that require Mr. Trump's strange and unbalanced behavior," continued Aliriza. 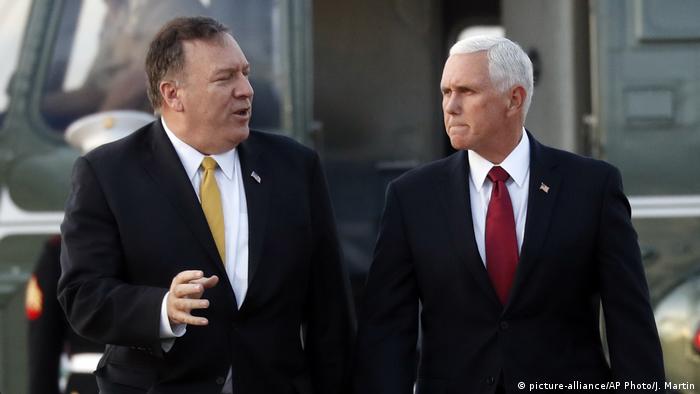 Pence and Pompeo in Ankara: "Contortions in US Foreign Policy"?

It is said that military advisers were not consulted before the White House announced the withdrawal of US troops from northern Syria. The constant changes that have been observed over the past few days seem to confirm this. "I think it can be said that there is no such thing as a serious strategy," says Michael Singh, director of the Washington Institute for Middle East Policy and former advisor to former US Secretary of State Colin Powell and Condoleezza Rice. "Those in charge will now have to hurry to quickly come up with a new strategy."

Experts agree that the past 12 days have already caused great damage. The Kurds feel betrayed and abandoned by the USA. Trump has also snubbed Turkey, not least with a letter in which he asked Erdogan on October 9 not to be a "fool". And the arbitrary behavior of the US has shown other international allies that Washington cannot be relied on. "Opponents of the US like to spread that our country is an unreliable partner," says foreign policy expert Brown. "We have now proven that ourselves."

A US strategy for Syria - it once existed. The Trump administration had set three goals for the civil war-torn country: defeat the "Islamic State" for good, reduce Iranian influence in Syria and bring about irrevocable political change that is favorable to the USA. 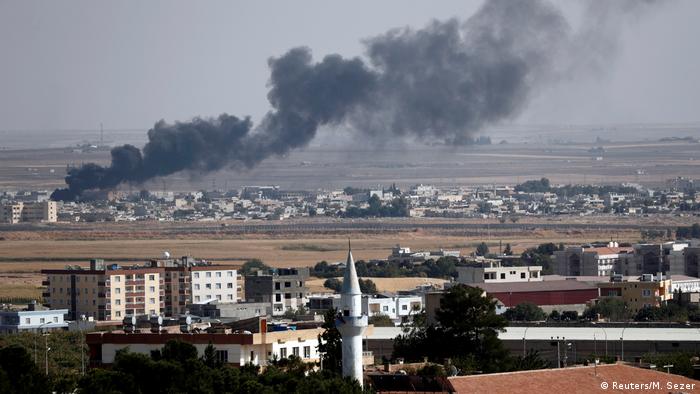 Escalation in northern Syria - with consequences for the region

"The latest developments may re-energize ISIS ['Islamic State', the Red.], "Singh told DW." They will certainly strengthen the Iranian position in Syria. And the US is likely to have less leverage in reaching a political settlement. So we were thrown back on all three points. "

Headwind also from our own camp

It is unusual that even the Republican majority leader in the US Senate, Mitch McConnell, is now extremely clearly against President Trump's course in Syria. "Withdrawing US troops from Syria is a serious strategic mistake," wrote McConnell in a guest post for the Washington Post on Friday. This mistake makes America more insecure, strengthens the enemies of the USA and weakens important partners. Republican McConnell says Trump's policies will play into the hands of Assad, Iran and Russia

"The combination of a US withdrawal and the escalating hostilities between Turks and Kurds creates a strategic nightmare for our country." He warned: "Even if the five-day ceasefire announced on Thursday holds, the events of the past week have set back the US fight against the Islamic State and other terrorists." McConnell appealed urgently to keep a limited number of US soldiers in Syria and to maintain the military presence in other parts of the region: "America's wars are 'endless' only if America refuses to win them."

The future starts on Tuesday

How things will continue after Trump's praised ceasefire is unclear - after all, not all sides are by far as enthusiastic as Trump is internationally. Turkish President Recep Tayyip Erdogan agreed to the five-day cease-fire on the condition that all Kurdish troops withdraw from an area that extends around 32 kilometers into Syria and extends over 440 kilometers along the Turkish-Syrian border. Ankara has long insisted that this "security zone" be evacuated by all Kurdish militias that Turkey regards as terrorist organizations. Ankara says it plans to relocate Syrian refugees currently living in Turkey to the region.

So Erdogan gets exactly what he wants. But there are also some Kurdish cities and parts of an important motorway in the area. On the Kurdish side, the enthusiasm is limited. "Our people did not want this war," the Kurdish politician Saleh Muslim told a local TV station, according to the British Guardian. "A ceasefire is one thing and surrender is another thing. We are ready to defend ourselves. We will not accept the occupation of northern Syria."

On Tuesday, when the ceasefire ends, Erdogan will meet with Russian President Vladimir Putin. Experts believe that Russian influence in the region will grow after the US withdrawal. How Turkey proceeds will probably also depend on the support Putin will offer his Turkish counterpart.

The article was supported by research by Alexander Matthews.