Once again he triumphed: With 28 points, 14 rebounds and ten assists, superstar LeBron James was the dominant player in the Los Angeles Lakers 106: 93 against the Miami Heat. With the fourth win in the best-of-seven final series, which was played out because of the corona pandemic at Disney World in Orlando, the 35-year-old led the Lakers to their 17th title in the NBA. This means that the Lakers will be level with the previous sole record champions, the Boston Celtics, in terms of titles.

For James personally, it was the fourth NBA triumph of his career. In addition to John Salley and Robert Horry, he is now the third player to win the NBA title with three different teams. He had previously triumphed with the Miami Heat (2012, 2013) and the Cleveland Cavaliers (2016). 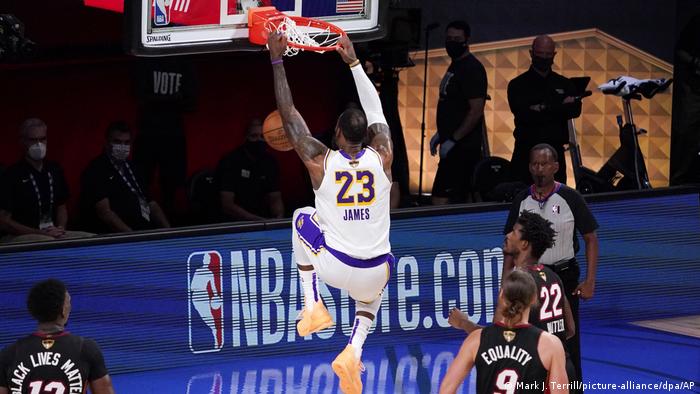 Even in the decisive game of the NBA final series, James was unstoppable

In addition, LeBron James was named Most Valuable Player of the Final Series (MVP) for the fourth time in his career, only the legendary Michael Jordan received the award more often (six times). "He's the greatest player the basketball universe has ever seen," said Lakers coach Frank Vogel about James.

And how does he see himself? He was "more than an athlete," James posted on social media in early 2018. In the meantime, "More than an athlete" has not only become a hashtag, but a public attribute of the basketball superstar that not only he himself, but also his club and sponsors use. James is one of the most prominent voices in the Black Lives Matter movement. He has also clearly positioned himself in the US election campaign: He supports Trump challenger Joe Biden from the Democrats.

"Hopefully one day people will recognize me not only because of the way I play basketball, but also because of my attitude towards life as an African-American man," LeBron James recently told the New York Times, referring to boxing legend Muhammad Ali as one of his role models.

Grew up in the simplest of circumstances

Little LeBron Raymone James had to fight from the beginning of his life. As the illegitimate child of a 16-year-old schoolgirl and a former prisoner who had run away before the birth of his son, life was not easy. James' mother Gloria raised the boy on her own, had hardly any money. After the early death of her own mother - LeBron was barely three years old at the time - the family life, which had been relatively stable until then, fell apart.

Gloria James, who had previously lived with her mother and two brothers, now moved frequently and had to temporarily place her son in a foster family to make ends meet.

However, this stay with strange parents was also the trigger for her son's impressive sports career. At the age of eight, LeBron James lived for some time with Frank Walter, his football coach at the time. Walter realized that the boy also had a great talent for basketball and persuaded him to play for a basketball team in addition to football - the foundation stone was laid. Proud mother and biggest fan: Gloria James and her son have a close relationship

In addition, the regular family life was good for little LeBron. At times he had hardly been to class because of the constant moves and the associated school changes. "They made me get up and go to school every day," James recalls in the book "LeBron James: The Making of an MVP" of life with the Walters. "To be part of a family, with a mother and father, a brother and two sisters, that was an incredible experience for me. It opened my eyes to become what I am today."

James also continued to develop on the basketball court. With the St. Vincent-St. Mary High School in his hometown of Akron, Ohio, James reached national finals and even won the national school championship. "This is the place where all dreams come true," James later said of his school in an interview with the New York Times: "When you grow up poor and black in this country, you dream a lot, but you believe not really that the dreams will come true. This is where I started to believe that I can do it. " 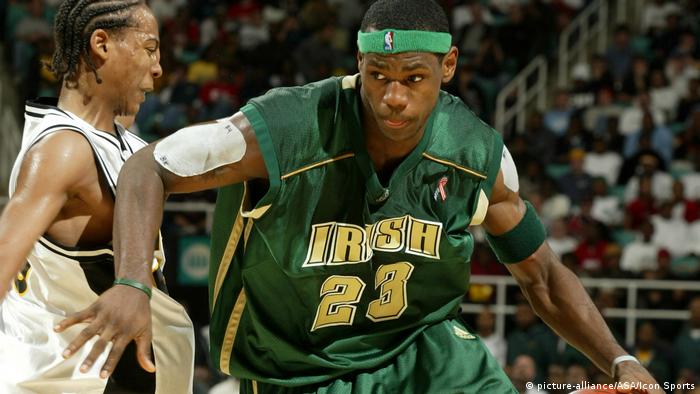 As a high school student already an exceptional athlete: LeBron James 2002 in the jersey of the "Fighting Irish"

In fact, James was already known to a large audience as a teenager, partly because some of his high school games were televised. In 2002 it landed with the title "The Chosen One" on the cover of "Sports Illustrated", the most famous sports magazine in the USA. The NBA scouts had long since noticed him. Consequently, he was selected as the first player in the 2003 draft by the Cleveland Cavaliers.

Loyalty and your own roots

James remained loyal to the "Cavs" for seven years until he moved to the Miami Heat in 2010, because there he saw the greatest chances for the championship title. He had previously agreed with his two teammates from the US Olympic team, Dwyane Wade and Chris Bosh, to move to Miami together. The three formed an almost unbeatable trio and, after failing in the 2011 finals to Dirk Nowitzki and the Dallas Mavericks, won the title in 2012 and 2013. The basis of their success was - besides their sporting ambition - their friendship. "Outside of basketball, LeBron and I are the best buddies. And we support each other," said Wade in an interview with "ESPN" in 2010: "If I have problems off the field, then he is the guy who drives me every day to make sure my attitude is right. And I'll do the same for him. " 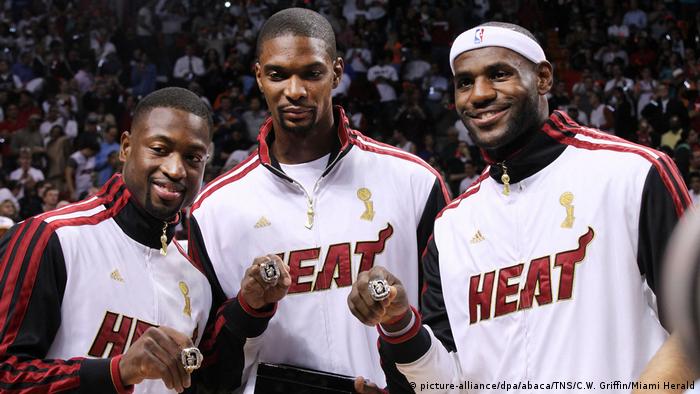 Strong trio: Dwyane Wade, Chris Bosh and LeBron James (from left to right) were known and feared as the "Big Three"

In 2014 James returned to "his" Cavaliers to do an unfinished business: To win the NBA title with his home team, which he actually did in 2016. It was the first championship for a Cleveland team in one of the major US sports leagues since 1964 - LeBron's gift to the city and fans. "This is Cleveland for you," James called into the microphone after winning the title against the Golden State Warriors.

In any case, loyalty and the knowledge of one's own origin are two qualities that distinguish James. James has been dating his wife Savannah Brinson since high school days, and they have two sons and a daughter. Unlike his own father, James puts family first. And he hasn't forgotten how he started himself. In 2018, James opened a school in Akron for disadvantaged children. 240 girls and boys from socially disadvantaged families are taught here and financially supported until they switch to college.

However, James himself has not lived near his hometown for a good two years, but in Los Angeles. Like so many NBA stars before him, he followed the call of the "big" Lakers. The Purple-Yellows from L.A. are the best-known and most popular club in the NBA, and many great players have played here. Hollywood stars like Jack Nicholson and Leonardo Di Caprio sit as fans in the stands - nowhere is there more spotlight for a top basketball player than here. "It's a dream come true for me," said James after his move was confirmed. 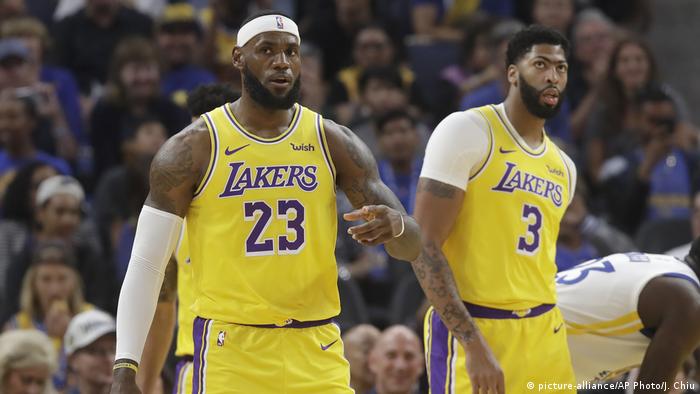 With Anthony Davis (r.) LeBron James (l.) Has a second top player at his side at the Lakers

Before the triumph in Orlando, the Lakers had won their last championship so far in 2010. Back then, Kobe Bryant was still the Lakers superstar. Bryant was tragically killed in a helicopter crash the day after James ousted him from third in the NBA's top scorer rankings.

"To be part of such a historic club is an incredible feeling," said the superstar now after the decisive victory of the final series. "I wanted to bring this team back to where it belongs." He has now fulfilled this promise that LeBron James made at the beginning of his engagement with the Lakers.