Do you trust a Pakistani

Donations for Pakistan: No heart for Mullah Omar

Millions of people are struggling to survive in Pakistan - yet the willingness to donate has so far been rather low. Why does this affect us so little? 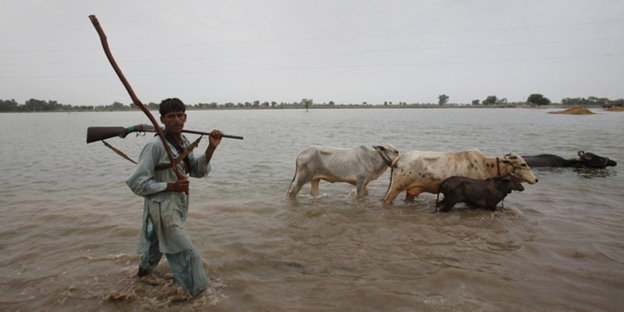 In Pakistan, 14 million people are up to their necks, but donations are still sparse. Image: Reuters

The Germans donate too little for the Pakistani flood victims, much less than after the earthquake in Haiti or after the tsunami. Says Foreign Minister Guido Westerwelle (FDP). Says government spokesman Steffen Seibert. Says the diakonia. Says Caritas. Pretty much everyone who is involved in it says it.

It is said that this has mundane reasons such as the holiday season, the donation fatigue after the collections at the beginning of the year or the lack of shocking pictures. Above all, however, the lack of willingness to donate has something to do with the country itself. Birte Steigert, the spokeswoman for the "Aktion Deutschland hilft" alliance, says: "Pakistan is perceived as a country with a difficult political situation."

You can put it that way. But you can also express things a little more specifically. It is recalled that in Pakistan, as Amnesty International reports, "torture and ill-treatment by law enforcement and security agencies are commonplace". That the Taliban have set up a regime of terror in some regions. That the state forces act with just as excessive force in the fight against the insurgents. That the Pakistani secret service supports the Taliban in Afghanistan. The fact that Pakistan can afford nuclear weapons, but in international rankings, whether it is literacy or the fight against corruption, reliably lands at the bottom of the list.

The problem is not just the state and the militias. The problem is also the tribal structures that prevail in the north-west of the country, which has been particularly hard hit by the floods. There, councils of elders sometimes order group rape or mediate a dispute between two families through the forced marriage of girls. The distinction between "state and militias bad, common people good" works even less than usual.

In any case, the Pakistani government and Pakistani society have earned their bad image in the past few years. (Just like, let's say, the city of Duisburg did not deserve its unflattering reputation either.) Not only Pakistan's image is crappy; Pakistan itself is a shitty state. Because, no, not every judgment is a prejudice; and yes, it is stupid but true that many clichés are unfortunately true.

For example this: If something happens somewhere in the world that offends Muslims (and that is a whole lot), the first thing in Islamabad, Karachi or Rawalpindi is bearded men and women veiled in their bodies flock to the streets, burn flags and make a loud wish to someone death. The fact that they often wear little more than a pair of sandals made from car tires on their feet seems to bother these people less than the publication of any cartoons in a country 5,000 kilometers away. Among the long-suffering liver sausages that Muslims love to present themselves as, the Pakistanis are the ultras. But they are not backwoodsmen. In their own way they take part in world events; not until June again, when there was a protest against Facebook founder Mark Zuckerberg because users of the site had called for a Mohammed caricature competition.

"May God give it to you" is a Turkish saying that is used to get rid of beggars who do not want to give anything. One is tempted to shout this phrase to the Pakistanis. (How one is inclined to wish that Mullah Omar and his followers perish in their caves.) Nevertheless, there are also people in Pakistan who defend themselves against the unbearable conditions. Do children live there who are not guilty of anything wrong. They too now need international help.

Perhaps this help is also necessary so that the Taliban or other Islamists, who are not interested in a better life, but only in an allegedly godly life, cannot present themselves as the only saviors. Perhaps, however, especially in the north of the country, at the end of the day it is the Taliban who decide on the distribution and use of food and medicines and who benefit most from international aid. In any case, it is not morally reprehensible to ask yourself such questions before making the transfer. But it is cheap, without being able to answer them, to castigate the lack of willingness to donate.