Various suggestions exist side by side and one after the other for the systematic classification of living beings. The taxon dealt with here does not correspond to the systematics currently used in the German-language Wikipedia or is out of date. 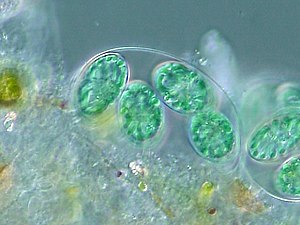 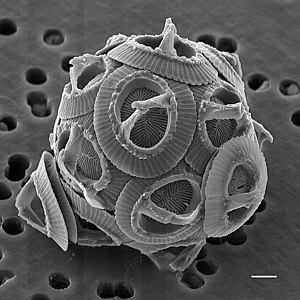 The Protists (Greek Protista, "primordial being", "first fruits"[1]) are a not closely related group of microscopic organisms, which, however, has long been regarded as a taxon (systematic unit). This includes all one- to few-cell eukaryotes, i.e. algae, some fungi and protozoa.

The first protists were observed by Antoni van Leeuwenhoek in 1675.[2] Then in 1866 the Protista were introduced as a taxon by Ernst Haeckel. They were conceived as a separate kingdom within the eukaryotes and contrasted with plants (Reich Plantae), animals (Reich Animalia) and fungi (Reich Fungi). The system was justified by the fact that one wanted to separate microorganisms, i.e. one- and few-cell organisms, from the other living beings and group them into two realms (Monera and Protista).

This classification lasted a long time, but does not correspond to the natural relationships. In modern systematics based on relationships, the protists no longer exist; the groups belonging to the protists were assigned to the corresponding groups according to their relationships. Since plants, animals and fungi evolved from protists and many multicellular organisms are related to single and few cell protists, the summary Protista resulted in an unnatural system.

Today the protists are assigned to different lines of evolution, some of which also include plants, fungi or animals. The choanoflagellates, mushrooms and animals belonging to the protists together make up the opisthokonta. The red algae (Rhodoplantae), green algae and higher plants (Viridiplantae) form the systematic group of plants (Plantae).[3])

Nevertheless, the term protists is still used as a non-systematic term up to the present day. Its definition is not entirely clear: a definition that is often found is “all unicellular eukaryotes”. They include some algae, some fungi and the protozoa. However, this definition is just as difficult for cnidarians like the Myxozoa as it is for groups like the Myxogastria. In order to counter such a majority, are today under the designation Protists mostly understood as "all one- to few-cell eukaryotes".

The locomotion often takes place swimming with the help of flagella or eyelashes or crawling, sliding, flowing or striding through the formation of pseudopodia. Quite a few species just float in the water, floating is often supported by long cell appendages.

Most protists live in the sea, partly near the surface, partly floating in the water, partly crawling on the bottom, partly stuck to stones, plants and the like; others are found in fresh water, few on land. There are heterotrophic, autotrophic, mixotrophic, aerobic and anaerobic forms. Quite a few protists also live parasitically in animals. Many occur in an astonishing number of individuals, and the incorruptible remains of dead representatives - such as the pebble shells of the radiolarians and diatoms (Bacillariophyta) or the calcareous shells of the foraminifera are rock-forming: They sediment on the bottom of the water and become rock through diagenesis, for example silica slate and Chalk, from which whole mountain layers are often composed.

The protists usually reproduce asexually by dividing them into two parts. In some species there are also multiple divisions, in some sexual processes occur (please referIsogamy, conjugation).

In the course of evolution, all higher multicellular organisms emerged from primeval protists, probably mainly through the formation of cell colonies, as can still be observed today in many algae.

Because the cell components and the most important expressions of life, such as movement, irritability, and reproduction, can be easily studied on them, protists are a popular object of biological research. However, only about 40 species cause protozoal infections in humans and are of medical interest.